We like to think we’re objective decision makers. But what happens when we choose the person first, then pick the standard that supports our decision? 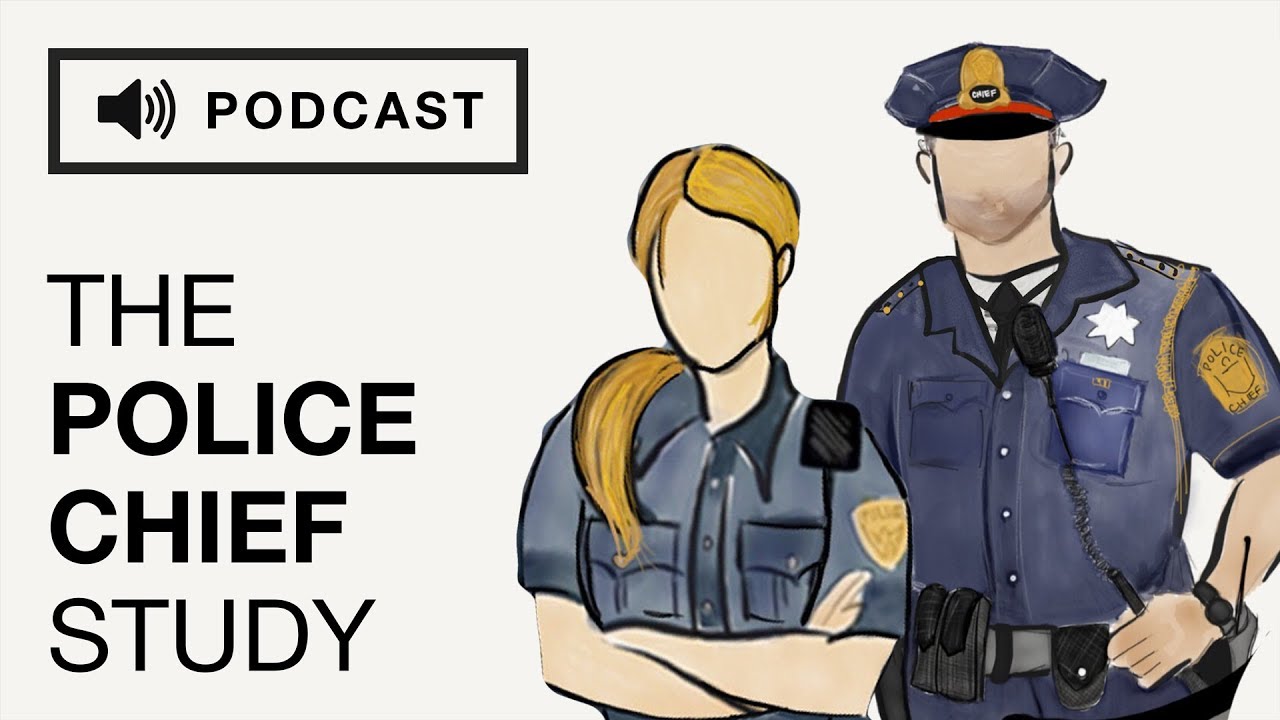 NARRATOR: Imagine this: You’re asked to promote a police officer to be the next Chief of Police. Here are your two candidates. One of them is, what we’ll call, “book-smart”: well-educated, lots of administrative experience, connected to key stakeholders. The other is “street-smart”: tough and physically fit, savvy about handling tough situations, and gets along well with fellow officers.

Given these two candidates – one who’s book-smart, the other who’s street-smart – who would you promote?

I posed this question to Professor Mahzarin Banaji, who responded:

MAHZARIN BANAJI: I tell myself that the way I would go about this process is to, of course, look at the needs of my organization, and pick the person who would best fit that need.

NARRATOR: As sound as this reasoning is, the science tells us that what we actually do is quite different.

The police chief set up I described was a real study, conducted by psychologists Eric Uhlmann and Geoffrey Cohen at Yale University. They gave people pictures of two police officers: one happened to be a man; the other, a woman. For half the people in the study, the male officer is described as “book-smart”; the female officer as “street-smart”. Then – as you were – participants were asked: who would you promote to be Chief?

NARRATOR: Indeed, the majority of people in this first group decided to promote the book-smart officer. So far, so good. All this tells us is that people seem to think it’s more important for a Police Chief to have “book-smarts” than “street-smarts”.

And this theory is easy to test: simply swap the descriptions:

NARRATOR: And you should see everyone’s promotion decisions flip, too: that is, they should now promote the other officer: the book-smart woman. But when the researchers did this, that’s not what they found.

MAHZARIN BANAJI: When the woman is book-smart? They said, “Oh, this organization needs a street-smart police chief!”

NARRATOR: In other words, the data show that – in both cases – people hired the man. Here, gender (more than skill) was driving the decision.

MAHZARIN BANAJI: What’s odd is that people who show this gender bias genuinely believed that they were paying attention to the actual strengths of each candidate, and what would be best for the police department. But the data were telling a different story: that the person we like seems to trump the standards we’ve set.

NARRATOR: Mahzarin says “person” here, because we don’t always want the man! In another study, the same researchers asked people to hire a women’s studies professor. They used a similar design (male and female candidates; switching their qualifications for half the participants), and in this case, the majority of people chose to hire the woman. Again: the person trumped the qualifications.

That’s why this bias is so perplexing. It pops up when we least expect it (even when we’re genuinely trying to promote based on merit).

Today’s podcast is about the standards we choose. Welcome to Outsmarting Human Minds.

This tendency to choose the person first, and the standard second is called casuistry: constructed criteria. And we see this same bias in other studies too: Who would you select to be on your jury? Who would you hire to be a construction foreman? Who would you admit to your college? All these studies showed that during a game-time decision, we focus on the criteria that benefits the person we already want.

MAHZARIN BANAJI: The example I’ll give you is of a CEO of a major corporation who was doing succession planning. And he decided to do a very simple experiment. So, first, he did it the usual way: he got people together, he had a free-ranging conversation about who should be the next CEO, he invited outside experts to advise, he took his group away on a retreat, and at the end of this, they generated the names of potential CEOS.

And then, he created blind biographies of the leaders of his company, and then he had people rate them on, you know, how likely they are to be good CEOs. They don’t know who they’re rating. So they’re making their decisions based on nothing but the accomplishments of these folks.

This CEO called me, kind of stunned by the data. The names that had been generated of potential CEOs using the blind biography method were entirely different than the names that had emerged in their standard discussion. There was zero overlap in these two lists.

NARRATOR: You heard that right – when they chose candidates based only on objective credentials (without knowing who they were), the leadership team chose ten entirely different people than when they used their usual strategy.

MAHZARIN BANAJI: This is not, you know, ‘Do I want to eat a ham sandwich or a turkey sandwich?’ This is about a vote to choose the next CEO of a major American corporation. That’s what’s so confounding.

NARRATOR: There are a few possible explanations for what happened. But a likely one is that this Fortune 500 company was constructing their criteria as they went along. When the leadership team didn’t know who they were judging, they had to choose an objective standard to evaluate everyone: one that was based on candidates’ accomplishments and experience. But when they knew it was Peter or Pablo, the standards they used… changed.

MAHZARIN BANAJI: We have a view based on our learning of who a CEO should be. It’s not easy to shake that view off – how could I shake off that view when hundreds of photographs I’ve seen of CEOS have all looked a certain way? My brain learns what CEOS look like. But apparently really talented people are in the pool, and I haven’t seen them as potential CEOs because something else precedes their accomplishments.

NARRATOR: Decades ago, the writer and reporter Walter Lippmann used the term “pictures in our heads” to refer to stereotypes. And, like it or not, these images we carry in our minds do influence our thoughts and behaviors.

NARRATOR: Recently, someone shared with Mahzarin an experience they had on a hiring committee. They were reviewing candidates for the position of a university dean.

As if that has anything to do with the person’s capacity to be a great dean.

NARRATOR: That’s how quickly it can happen! A single off-the-cuff phrase (“but she has a 6 year-old”), and the standard can shift from thinking about professional qualifications to the presence of a child in the candidate’s life.

Here’s what we have to acknowledge: our standards are not set in stone. We change them. Not because we should, or because the situation demands it. Rather, we are likely to choose the person who fits the picture we have in our heads, and then focus on the standard that justifies our choice. This is difficult to catch, because it can be so subtle! After all, very few of these kinds of decisions have a clear “right” answer. And you and I are confronted by thousands of pieces of information: variations in height and weight, in physical attractiveness, in accent; or bigger things like education, age, gender, race, and sexuality. The complex combination of these qualities creates gray areas. And that’s what makes it possible for us to say, “That person is great, but …” and then fill in the blank. “But she has a 6 year-old”. “But he just doesn’t look the part”.

The question for us is: what are we going to do about it?

Before hiring or promoting people, think about the really critical skills needed for success. Setting these standards in a vacuum, without knowing who the candidates are, may help you stay objective.

And then, there are things we can do during the actual decision-making process.

MAHZARIN BANAJI: What if we began selection or promotion meetings by just saying, “We all have our blindspots; what are they? Are there systematic patterns in who we seem to promote and like? Did the candidates we selected succeed in the past?” As discussions unfold when we’re making these important decisions, we should allow people to challenge us. We should be ready to challenge them. If we hear things like ‘I don’t think she’s going to be ready for this job.’ Ask why. If you hear, ‘I don’t think he fits’, ask “What do you mean by ‘fit’?”.

NARRATOR: Those of us in senior positions especially have the power to create these environments where everyone is encouraged to voice their opinions:

MAHZARIN BANAJI: If a bunch of people who are more senior just happen to speak first and say what they think, what’s the likelihood that a new hire is going to perk up and say, ‘I think you’re all wrong, I think it’s this other person who is actually the most excellent candidate.’? That’s just not gonna happen. So create the conditions where difference is seen as a strength, and where people can speak up with no repercussions. Discuss the order in which opinions may be offered. Ask the senior-most people to hang back, and not speak first at the table.

NARRATOR: Small things like choosing objective criteria, getting to the “why” behind our decisions, and enriching our discussions by welcoming different perspectives can help us stick to the standards that matter.

Outsmarting Human Minds is a program founded by Mahzarin Banaji, devoted to improving decision-making using insights from psychological science. Support for this episode was provided by PwC and Harvard University. This episode was developed by Olivia Kang and Mahzarin Banaji. Sound editing and mixing was done by Evan Younger. Music was composed by Miracles of Modern Science. For references and related materials, go to outsmartinghumanminds.org.

Podcast
10 min
Sometimes it makes sense to shift our standards based on context. But are we raising and lowering the bar when we shouldn’t?

“The Standards We Choose” was created and developed by Mahzarin Banaji and Olivia Kang with funding from PwC and Harvard University.