We overvalue things we own. This tendency seems harmless for family keepsakes — but it can also sway big decisions we make about homes, investments, and more. 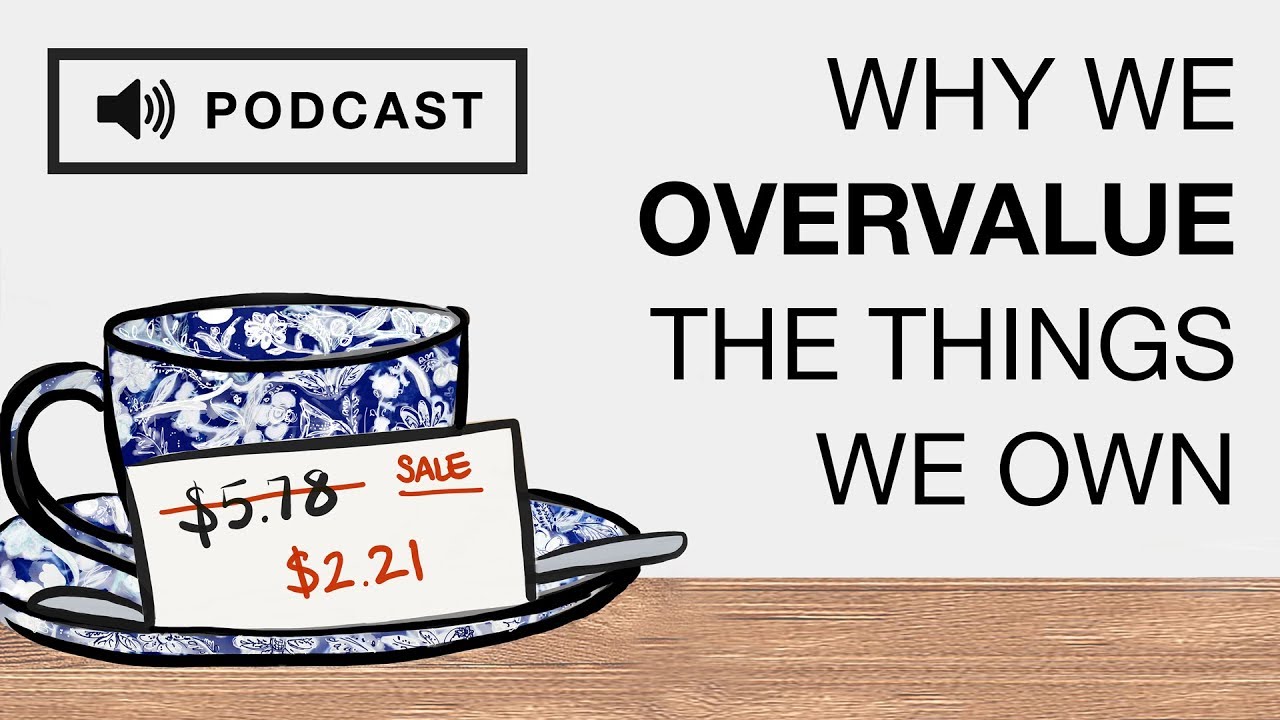 In 1990, a team of psychologists led by Daniel Kahneman at the University of California, Berkeley conducted a simple study. They gave a group of people coffee cups, told them the cups were theirs to have, and then asked them to price their new possessions: how much money would they sell the cups for? The answers varied, but the average price they settled on was 5 dollars and 78 cents.

If you’re thinking ‘Fair enough’, so did I when I first read about this experiment. But there’s a second part of the study – and that’s where things get interesting:

Another group of people weren’t given a cup at all. Instead, they were shown the same cup and asked: how much would you pay to buy it?

And the price they came up with was 2 dollars and 21 cents. If you’re keeping track, that’s a 62% discount from what sellers were asking for.

And here’s another percentage that came out of this study: 80.

Sellers lost 80% of their projected sales… just because they had no idea what their cups were actually worth.

So what happened? Why would just knowing a coffee cup is yours lead you to more than double its value?

Today’s podcast is all about the strange phenomenon psychologists call the endowment effect, and how it impacts the decisions we make. I’m Olivia Kang, and this is Outsmarting Human Minds.

So here’s how the endowment effect works: own something – easier yet, just hold it – and it will increase in value. Just like that.

The catch, of course, is that it’s only more valuable to you.

Now, some psychologists think this comes from a good place: a love of ourselves, and by extension, anything attached to us – and others think it’s just that we have an aversion to loss… but that graveyard of unsold coffee cups from the Kahneman study makes one thing clear, and that is: this bias is far from harmless.

When I first saw those numbers: cups more than doubling in perceived value; 80% losses in sales – I was surprised… and then I had questions.

DR. SANTOSH ANAGOL: The endowment effect project is about new investors in the financial marketplace – how behavioral biases change their decisions.

NARRATOR: This is Dr. Santosh Anagol. He’s an economist and an Assistant Professor at Wharton in the Business Economics and Public Policy Department. He has spent years investigating endowment effects as they occur in the world of business.

DR. SANTOSH ANAGOL: In basic economic theory, one of the main tenets is that people should have one valuation for what an object is worth to them. It shouldn’t matter whether they currently own that object.

NARRATOR: And yet it does matter.

DR. SANTOSH ANAGOL: And that turns out to be very important. Okay, so take for example, clean air. It turns out when you do surveys and you ask people ‘How much would I have to pay you to give up clean air, they typically report valuations that are two to three times higher than what they’d be willing to pay to get clean air.

NARRATOR: So let me get this straight. The same person who would pay $100 to GET clean air would need $300 to give it up…

DR. SANTOSH ANAGOL: That’s a problem because then which of those numbers should we use to figure out how much we as a society should spend on creating an environment with clean air? And this, of course, is relevant not just for public goods like clean air, but also if a firm is thinking about trying to sell a new product and they want to figure out, well, how much are people willing to pay for this product. It would depend on how you ask them.]

NARRATOR: So it’s not just coffee cups. It’s clean air, it’s new products. It’s that pet project you keep investing in at work, when you should be letting it go. It’s those famously bad trades sports teams make because they prize one of their players just a little too much. And Dr. Anagol’s research shows: this can cost us cold, hard cash.

NARRATOR (TO DR. ANAGOL): What is an IPO lottery?

DR. SANTOSH ANAGOL: It’s kind of a unique regulatory structure where basically when there’s excess demand for IPO shares – the firm is required to run lotteries where it’s randomly chosen which of the applicants actually get the shares.

NARRATOR: Because this is completely random, whether you win or lose the lottery should have nothing to do with how you value this stock once it’s traded on the market.

But that’s not what Dr. Anagol found:

NARRATOR: Let me just remind you that this is happening in a setting where the whole point is to accurately assess value! And if you’re thinking ‘well, maybe holding onto the stock is a good idea’ – it wasn’t. Dr. Anagol estimates that endowment costs lottery winners right around 5% of their portfolio values.

DR. SANTOSH ANAGOL: It just seems like these investors never ask themselves, ‘Would I want to buy this stock on my own if I hadn’t been randomly assigned it?’

NARRATOR: So maybe this is something we should be asking ourselves.

Whether we’re talking about simple coffee cups or the broader context of our global markets (or anything in between!) how can we detach ourselves from our decisions?

Here are a few ideas:

First: Know your numbers. Gut instinct might feel right, but relying on actual data – for instance, the market values of the cups, cars, or homes we wish to sell — will always pay off in the long run.

Second, keep decisions in the here and now. If you’re wondering whether to keep a struggling stock, ask yourself “Would I buy it today?”; “Do the reasons for buying it in the first place still hold?”

Finally, take yourself out of the equation. When it comes to hard decisions at work, imagine that you’re advising someone else on what to do. Or crowd-source your decisions: seeing others’ valuations will show you if your numbers are or aren’t adding up.

Knowing that things attached to us acquire an extra glow in our own minds is fine when it’s our grandmother’s watch or a coffee cup that won’t cost us our retirement savings. But in the world of work, it’s time to wake up and smell the coffee and value things for their actual worth — no more and no less.

Outsmarting Human Minds is a program founded by Mahzarin Banaji devoted to improving decision-making using insights from psychological science. Support for Outsmarting Human Minds was provided by a grant from PwC to Harvard University. This episode was developed by Mahzarin Banaji and Olivia Kang, and featured Dr. Santosh Anagol. Music was composed by Miracles of Modern Science.

The endowment effect refers to the tendency to regard something we own to be more valuable than it is.

Because we love ourselves, anything that comes to be associated with us may acquire a kind of a glow of value or importance in our minds beyond its actual value.

Combat the endowment effect by relying on hard data to make your decisions (e.g., the data on what your house is worth rather than your feelings about how beautiful you think your wallpaper is!)

We see evidence of endowment effects for lottery tickets, coffee mugs, even the letters of our own name. But new research conducted at Vanderbilt shows humans’ “greater tendency to overvalue things that are related to survival and reproduction”. In the study, items rated as more likely to “directly help its owner survive and thrive” (like a pill for maintaining perfect weight or a luxury car) produced the greatest endowment effects. The trend towards overvaluing items more strongly related to health and status “may reflect the potential evolutionary origins of the effect”. What’s more, this tendency, and the endowment effect broadly, isn’t limited to humans! Researchers found the same effects in chimps and orangutans. Read more at Phys.org.

This Washington Post article looks at how return policies take advantage of the endowment effect to influence shoppers’ decisions.

“Both the Boston Red Sox and the Chicago White Sox had rather mediocre seasons last year. The Red Sox have some exciting young hitters but a lack of decent pitchers. The White Sox have almost the exact opposite problem … So the argument was to put a Chicago White Sox’ message board: would they trade their great young pitcher Chris Sale for two excellent and even younger hitters from the Red Sox, Xander Bogaerts and Mookie Betts?” From John Auther’s 2015 Financial Times article: “Investors psyched by the endowment effect”.

For a broader introduction to how we think, and where our blindspots are, check out Daniel Kahneman’s NYT Bestseller and Winner of the National Academy of Sciences Best Book Award (2012): Thinking, Fast and Slow.

Irrational Attachment was created and developed by Mahzarin Banaji and Olivia Kang with funding from PwC and Harvard University.

Narration by Olivia Kang, featuring Professor Santosh Anagol (The Wharton School at the University of Pennsylvania)