Sometimes it makes sense to shift our standards based on context. But are we raising and lowering the bar when we shouldn’t? 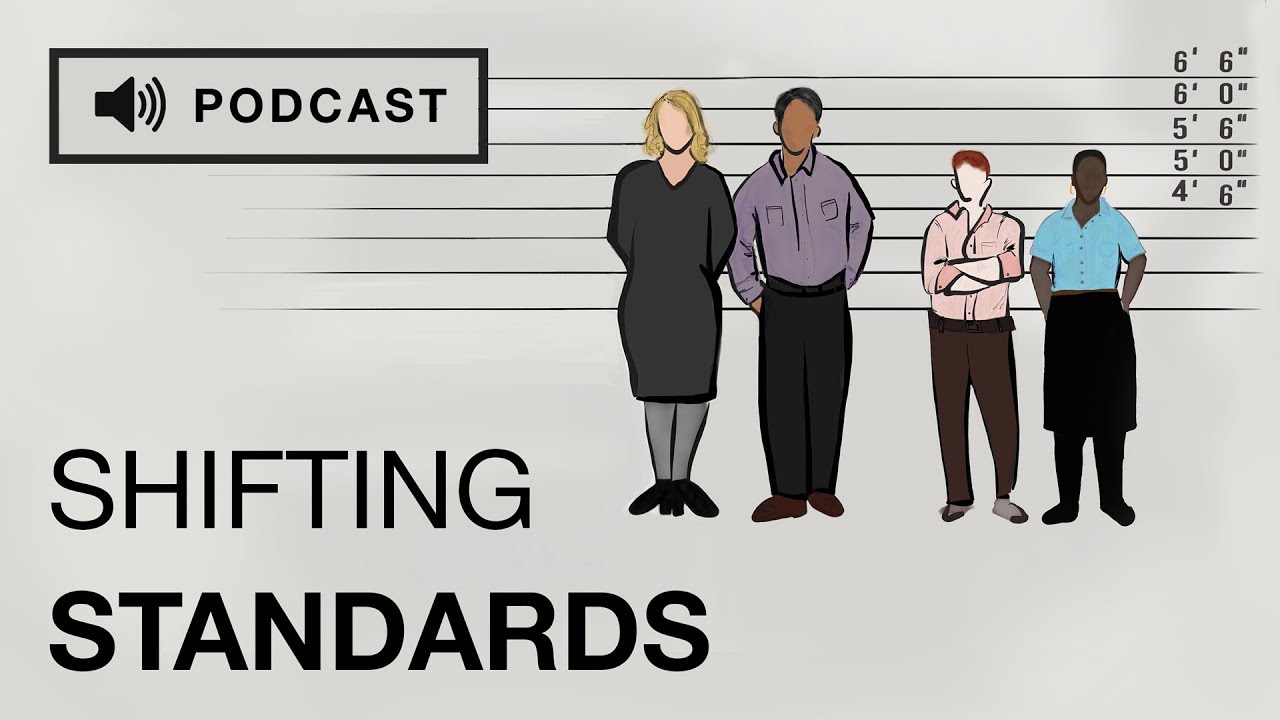 OLIVIA KANG: So, if I’m a participant in this study, what am I seeing?

MONICA BIERNAT: Okay. You’re seeing photographs we took of people around Ann Arbor. We tried to take them both standing and sitting next to some object so that there was some basis for judging.

In these studies, her participants do something simple. They look at pictures of people as they stand next to doorways and sit near desks – and then guess how tall each person is, in one of two ways: They either rated how tall the person was on a scale of 1 to 7 (where 1 is “very short” and 7 is “very tall”), or they had to be specific, and actually guess each person’s height in feet and inches.

But when people had to guess height in feet and inches, their answers changed… and presented the first evidence of a phenomenon we now know as shifting standards. Welcome to Outsmarting Human Minds.

OLIVIA KANG: What are shifting standards?

MONICA BIERNAT: So the basic idea is a pretty simple one. It’s that when you make any sort of a judgment: how big an object is; how nice a person is, you might use different standards depending on who you’re judging. We’re going to judge people relative to within-group standards. So, you know, I say, ‘My cat is huge!’ but no one’s surprised that my big cat can fit in a small car because we know that ‘small’ and ‘big’ means something different depending on what’s being described. So it is, I think, I think, a really natural process.

Remember, when people in the study simply rated height on a 1-7 scale, they showed no bias. Men and women were equally likely to be called “tall”, “short”, and anything in between.

But when the researchers asked them to guess exactly how tall… something shifted.

Participants might call both a man and woman “tall”… but they were consistently guessing that the men were several inches taller than the women. Depending on who they were looking at, “tall” could mean 5’9” or 6’1”.

When I first heard this, I thought: “So what? Everyone knows that men, on average, are taller than women.”

But then, Monica said this:

MONICA BIERNAT:
I should say men actually were not taller than women in the sample.

MALE VOICE: “In this booklet, the men and women are actually of equal height. We have taken care to match the heights of the men and women pictured … Therefore, in order to make as accurate a height judgment as possible … do not rely on the person’s sex.”

NARRATOR: The researchers did one more thing to motivate everyone to guess height correctly: they offered cold, hard cash: Be accurate, and win an extra $50.

It shouldn’t have been too hard: after all, the photos held clues: if Benjamin and Maria both come up to the same place on a door-frame, they’d have to be the same height! But none of this made much difference. Participants still saw the men as significantly taller than the women.

This is why the data are so striking. Not because people used gender stereotypes to make their judgments. Of course they did – we all would. The real surprise is that people couldn’t let these stereotypes go. Even with explicit instructions, even with data in front of them and money on the line, they couldn’t get it right.

Let’s be clear: there are times when we should shift our standards. I mean, why would you want to assume that a big cat is larger than a Mini Cooper, or that a “brilliant” 3 year-old can do particle physics? The difficulty is that we also shift our standards when we shouldn’t. When adjusting actually leads to error, like we see in the height study.

So how do we know when it’s okay for our standards to shift?

It all boils down to two simple questions we can ask ourselves:

One: Are you confident in whatever belief is causing this shift? I mean, how big can cats really get?

And Two: Does the data back you up in this particular case?

Take the height study. Are men taller than women? On average, yes, of course. In every culture, everywhere on the planet.

But in the sample of men and women in front of you, does the data back you up? Actually, no. Not in the Biernat study. So we have to revise our stereotypes.

OLIVIA KANG: You know, this, this reminds me of: I think when I was in 6th grade, a lot of people would talk about how, you know, “At this moment, the best golfer is Tiger Woods, the best rapper is Eminem, the tallest basketball player is Yao Ming”, and how these all went against stereotypes.

MONICA BIERNAT: How funny! Uh-huh … that is the case where the objective evidence is sufficient to push people over the top.

OLIVIA KANG: So it’s important to consider the objective evidence in front of you. Because here’s the thing. Not all the patterns we learn are right. Sure, it’s silly for us to expect a cat to be bigger than a car. But we’ve also learned other patterns: stereotypes about what CEOs, golfers, and surgeons look like; what women, individuals with disabilities, or the elderly are capable of. And these patterns we learn can distort what we see.

Professor Biernat’s studies suggest the kinds of long-term consequences shifting standards can have in the workplace. Imagine you’re an employee for whom the bar was set low. That makes it easy to exceed expectations. Monica shows that this will lead to more praise… but that this praise is usually empty.

MONICA BIERNAT: So, you might get positive feedback about your performance: ‘Wow, that was great, you did a really good job’ – but down the road, when a bottom-line decision is being made about ‘Well, who am I gonna give the best assignment to?’ or ‘Who am I gonna hire?’, ‘Who am I gonna promote?’ – those judgments are more likely to be consistent with the broader stereotype.

OLIVIA KANG: One of my colleagues calls this getting “a pat on the head, and then a kick in the pants”. And over time, the effects of this can build up, creating confusion and a lack of motivation.

MONICA BIERNAT: And that can also breed the sense of: “Can I trust any feedback that I get? What does it mean if somebody says ‘Great job!’ but then doesn’t, give me the next plum assignment? I can’t trust anything, maybe, that this person says” and that can create another sort of cycle that is bad for everybody.

OLIVIA KANG: Of course, no one wants this. As managers, shifting standards can cause us to overlook talent that’s right in front of us. And on the other side, it can leave talented employees wondering, “Why even try?”

So what can we do to keep our standards steady?

We’ve already talked about two questions you can use to stay on track:

One: Ask yourself if what you believe is fact. Don’t just rely on your sense of things or what something feels like. If you do, you’re more likely to rely on your stereotypes –

MONICA BIERNAT: So, for example, assuming that a woman who’s pregnant will not want to take on a new case – is probably not the thing you should do; you should ask the person if this is what they want.

OLIVIA KANG: Two: Ask yourself if this belief is supported by relevant data –

MONICA BIERNAT: You know, when it comes to evaluating performance, again, have specific criteria, focus on performance in a particular time window.

OLIVIA KANG: And there’s a third thing we can watch out for: Language.

OLIVIA KANG: So ask yourself: what does it mean to be “aggressive” or “a visionary”? What are the metrics for vague terms like “executive presence”? Can we back up the words we’re using with standards we hold steady for everyone?

What we’re trying to fix here is not easy. But the tall and the short of it is: we can seek out the right data, ask the right questions, and if we do, we could make better decisions.

Outsmarting Human Minds is a program founded by Mahzarin Banaji, devoted to improving decision-making using insights from psychological science. Support for this episode was provided by PwC and Harvard University. This episode was developed by Olivia Kang and Mahzarin Banaji, and featured Professor Monica Biernat. Sound editing and mixing was done by Evan Younger. Music was composed by Miracles of Modern Science. For references and related materials, go to outsmartinghumanminds.org.

Podcast
11 min
We like to think we’re objective decision makers. But what happens when we choose the person first, then pick the standard that supports our decision?

The Standards We Choose: The Police Chief Study

“‘I get undue adulation all of the time for simply being out with my kid,’ said Adam Mansbach, author of the bestselling book Go the F**k to Sleep. ‘Just because my kid isn’t freezing to death, I’m a great father.’” Read Alexis Coe’s article in The Atlantic for more about ways we shift our standards in everyday life.

This analysis of performance evaluations of junior attorneys who were male or female on Wall Street (Biernat, Tocci, & Williams, 2011) suggests the nuanced ways we can unintentionally shift our standards in the workplace. For more of Dr. Biernat’s work, visit her research lab website.

“Shifting Standards” was created and developed by Mahzarin Banaji and Olivia Kang with funding from PwC and Harvard University.