A study found that being Black hurt an applicant’s changes of being hired just as much as a felony conviction. What do biased hiring decisions mean for the survival of a business? 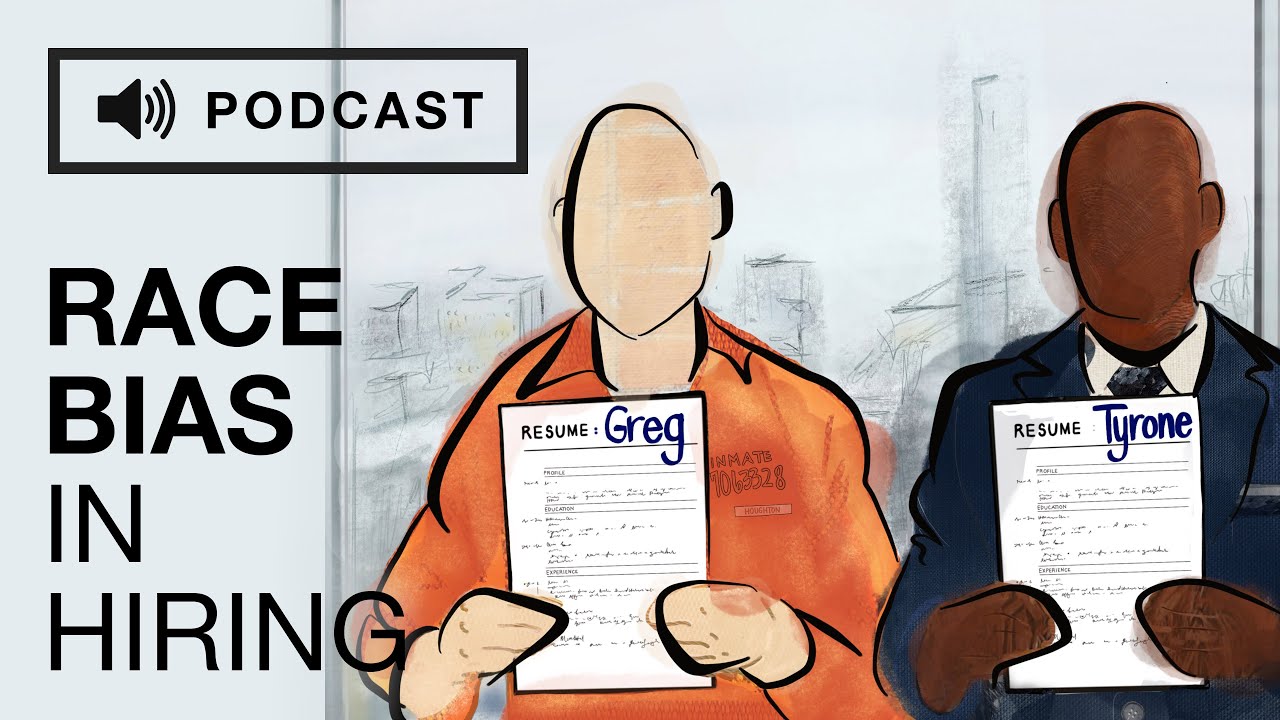 NARRATOR: It’s the early 2000s. Devah Pager, the late Harvard sociologist, is a graduate student at the University of Wisconsin-Madison. She’s there to study racial inequality – particularly in the job market, and she also volunteers at a center for jobless men. It’s at the center that she keeps meeting job-seekers who share a similar story:

RONALD LEWIS: I’m a father. I’m a hard worker. I served my — I, I did my probation, no violations. Model citizen. They called me into the office and said, um, “Your record came back; we gotta let you go.”

NARRATOR: This is Ronald Lewis, speaking to PBS NewsHour about his struggle to find and hold a job with a criminal record. Devah spoke with a lot of Ronalds – men who were capable and articulate, and yet seemingly unemployable for jobs that should have been well within their reach. It made her wonder:

DEVAH PAGER: Is this something we should be investigating more systematically? But I also wanted to look at how race interacted with this variable.

NARRATOR: What Devah found transformed how we think about race bias in hiring. In this episode, we explore this bias, and the data showing how it can hurt both applicants and employers. Welcome to Outsmarting Human Minds.

Devah Pager wanted to explore just how much race and criminal record were affecting employment prospects. So she conducted an experiment.

NARRATOR: This means that she went out of the lab and into the world to answer her question – in this case, Milwaukee, Wisconsin.

DEVAH PAGER: I hired young men to pose as job applicants for real entry-level positions, positions that required no more than a high school degree.

NARRATOR: These were jobs like cook, cashier, delivery driver, and warehouse worker.

DEVAH PAGER– And I assigned them fictitious resumes that reflected identical levels of schooling and work experience, and they learned how to respond to employment interviews in very standardized ways.:
NARRATOR: Behavior, qualifications, everything was the same… except the two things Devah was investigating: race…

NARRATOR: …and whether or not they had a felony drug conviction.

The data showed that applicants were half as likely to get the job (or even a callback) when they had a criminal record. This is disturbing, but perhaps not surprising. The real shock came when she looked at race:

DEVAH PAGER: Black applicants with a clean record fared no better than white applicants who had just been released from prison.

NARRATOR: Put another way: to employers, being black was viewed as equivalent to having a felony conviction.

When I share this finding with people, the question I hear most is “Oh my god, this can’t be true everywhere, can it?” After all, Milwaukee was one of the most segregated cities in America at the time. But Devah conducted the study again, this time in New York City…

DEVAH PAGER: …New York has got a huge amount of racial diversity…

NARRATOR: …and found the same results.

This bias was robust – and in their 2004 study, economists Marianne Bertrand and Sendhil Mullainathan showed that it was happening even before employers set eyes on the candidate. In fact, all they had to see was the name on the resume.

YAFATE BEYENE: Is there a difference between black and white names and if so, what’s the difference?

NARRATOR: The Yafa Show posed this question to various people, and it’s clear from their responses that we have intuitions about what names “sound” White…

VARIOUS VOICES: Jamal… Laquisha… Tamika… I’m kind of old, so I go back to thinking stuff like Jackson or Tyrone or Denzel.

NARRATOR: Marianne and Sendhil randomly assigned either a White- or Black-sounding name to almost 5000 resumes that were matched for quality, and then sent them to employers all over Boston and Chicago. They wanted to know just how much inferences about race were influencing hiring decisions. All else being equal, the Emilys and Gregs received 50% more callbacks than the Lakishas and Tyrones.

Hearing about these kinds of hiring errors may hurt your sense of reason – but the data suggest that practicing them can also hurt your business.

DEVAH PAGER: So, there’s a classic theory in economics that suggests that those that have a taste for discrimination have to pay a price for indulging that taste.

NARRATOR : Devah is referencing the work of economist Gary Becker. His model suggests that if a company’s prejudice keeps them from hiring good candidates because of race (no matter how talented the person), that company will lose out in the market. It won’t have the best people and so it should be more likely to fail. This theory is well-accepted… but it’s been hard to test. Until the 2008 recession.

NEWS ANCHOR 1: The DOW tumbled more than 500 points, after two pillars of the street tumbled over the weekend…

NEWS ANCHOR 2: The US economy continues to bleed jobs…

NEWS ANCHOR 3: More than 3 and a half million jobs have been lost since the recession…

NARRATOR: A record number of businesses closed during the financial crisis.

NARRATOR: …and that made Devah think: Does Becker’s theory hold? Did the companies that showed discriminatory hiring suffer more during the economic downturn?

In 2004, she had sent job candidates to 170 New York employers. Now, she asked: which of them were still around in 2010, 2 years after the recession? She cross-referenced national databases across the two years and came to a striking conclusion:

DEVAH PAGER: Those that we’d observed discriminating in 2004 were in fact much more likely to go out of business six years later than those that hadn’t discriminated.

NARRATOR: By 2010, 36% of discriminatory businesses had failed – that’s more than twice the percentage of businesses that had shown no racial bias.

To be clear, this is a single study, and it doesn’t necessarily mean that discriminatory practices cause businesses to fail. Devah’s own theory?

DEVAH PAGER: Employers that rely on their gut instincts rather than more systematic kinds of evidence may be led astray both in their hiring decisions as well as in other decisions about firm management.

NARRATOR: So rather than one causing the other, biased hiring and business failure could both be consequences of an overreliance on short-cuts during decision-making.  So: how can we make sure the right information is factoring into our decisions?

Some minority job-seekers “whiten” their resumes:

QUIRTINA CRITTENDEN: My name is Quirtina… I shortened my name to just Tina.

NARRATOR: …or shift the focus onto their accomplishments:

ZELDA HARRIS: When I’m applying to places, I really try to get “Princeton” somewhere in the first three words of that subject line.

NARRATOR: But if we really care about getting the best talent, we need to take the responsibility off the shoulders of applicants, and into our own hands as organizations.

First, stop relying on intuition that isn’t backed by evidence. If you remember our video about faces and first impressions, you know how completely “gut instinct” can fail us. Race, name, hobbies, social class… the research shows that these details affect our decisions, whether we know it or not. So if the information is unnecessary, find ways to filter it out before the resume hits your desk.

And once you’re ready to interview? Ask each candidate the same questions, in the same order, and evaluate them the same way. This is called the “Structured Interview” – and it helps you compare only the relevant skills and experience across all your applicants.

So try it. Because finding a job is hard… and finding the right candidate is hard too – but we can all benefit by ignoring the irrelevant details, and focusing on the evidence.

This episode is in memory of Dr. Devah Pager, Professor of Sociology and the Kennedy School of Government at Harvard University.

“How Much Does Your Name Matter?”, asked Freakonomics Radio. Hear their thoughts and explore your own name with this app by Nametrix.

If your name decided your profession, what would you be? Check out this infographic showing common names by profession.

“What’s in a name? Potentially your future.” From Jenna Goudreau’s article “13 surprising ways your name affects your success” (Business Insider).

José or Joe: Who gets the job? Watch this Buzzfeed video to hear about why José Zamorra decided to “whiten” his resume, and this Harvard Business School article about why it may have worked.

Can your skin color affect your chances of booking a room? Get the story behind the hashtag #AirbnbWhileBlack (and what Airbnb is doing about it) in this episode from NPR’s Hidden Brain.

“While it’s exceedingly difficult to remove bias from an individual, it’s possible to design organizations in ways that make it harder for biased minds to skew judgment.” Read Iris Bohnet’s tips for taking bias out of interviews in her article “How to Take the Bias Out of Interviews” (Harvard Business Review).

Hiring discrimination against black Americans hasn’t declined in 25 Years. Data from 24 field experiments, across over 54,000 applications and more than 25,000 positions attempts to explain why.

Dr. Devah Pager’s book Marked: Race, Crime, and Finding Work in an Era of Mass Incarceration was published in 2007 by University of Chicago Press.

“Race bias in hiring: when both applicants and employers lose” was created and developed by Olivia Kang, Kirsten Morehouse, Evan Younger, and Mahzarin Banaji with support from Harvard University, PwC, and Johnson & Johnson.

© 2019 President and Fellows of Harvard University