We work out, then pig out. Does this also happen with our good deeds? How can we avoid bringing our moral scorecards to the workplace? 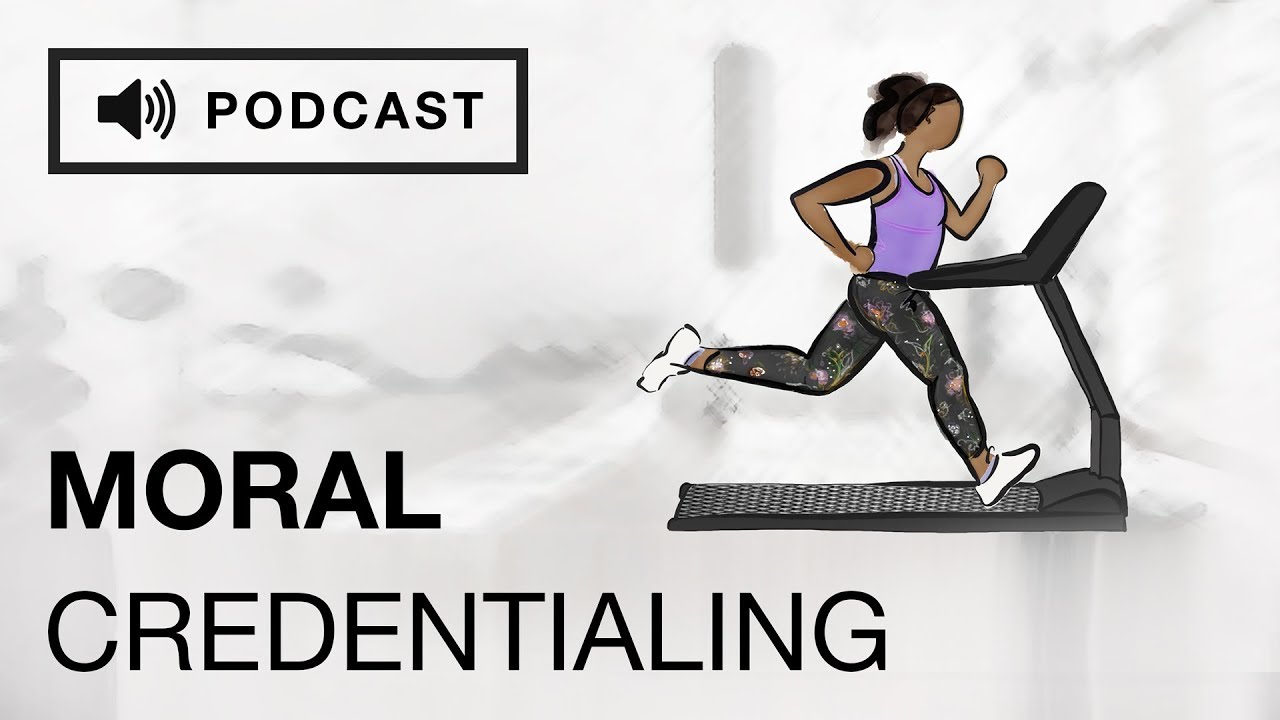 OLIVIA KANG (TO SA-KIERA HUDSON): So what are the kinds of good things you do in your everyday life?

SA-KIERA HUDSON: Well, I turn in my assignments on time, or I give soup to a sick friend, I help old ladies cross the street and –

OLIVIA KANG (TO SA-KIERA HUDSON): Do you really?

SA-KIERA HUDSON: Sometimes– with their bags.

OLIVIA KANG: I recently had a conversation with Sa-Kiera Hudson, a member of Harvard’s Psychology Department. We were talking about what it means to be “good”… which pretty quickly turned into a discussion about being “bad”.

SA-KIERA HUDSON: I think when we think about doing good things, that it sets us up really well for the future. That when I do a good thing now — that means I’m going to do good things in the future. But that’s not quite how it works.

OLIVIA KANG: We don’t just do good things, and then more good things. Instead, we track our “good” behaviors, and use them to justify our “bad” ones.

SA-KIERA HUDSON: So, if I do a good thing like going to the gym now that justifies some of the bad things I might do after the gym. Like eating an entire pint of ice cream or sitting on my couch for three days and binge-watching a TV show.

OLIVIA KANG (TO SA-KIERA HUDSON): So… all of these things sound really relatable.

SA-KIERA HUDSON: Yes. Yes, they are. We all do them in a lot of different domains. This might be kind of sad, but I [laughter] – I very carefully track how much work I’ve done and I justify not doing work based on how much work I just did. So it’s like “Oh yeah, I just like went to a meeting, or I answered one email, it was an important email, it was a long email, and now I can take a break for X amount of time.”

OLIVIA KANG (TO SA-KIERA HUDSON): Should we save broadcasting this until after you graduate? [laughter]

OLIVIA KANG: Sa-Kiera said I could air this, because her advisors probably already know this happens – because they probably do it too. We all do, in different ways.

Psychologists call this moral credentialing. It’s not conscious; it can even go against our best interests or the things we consciously believe. But we all do it all the time. The question is: does it matter?

As I said during the interview…

OLIVIA KANG (TO SA-KIERA HUDSON): So, all of the examples that we’ve talked about so far – like, honestly who cares if I eat a lot of ice cream? If that harms anyone, it mostly just harms me.

OLIVIA KANG: That’s where scientific experiments come in. They show us how the consequences of moral credentialing can be bigger. For instance, a study by Khan and Dhar showed that we’re more likely to indulge ourselves and buy expensive things after donating to a charity. Another study conducted in 2010 found that after we buy eco-friendly products, we’re more likely to behave in unethical ways. And Sa-Kiera brings up another point:

SA-KIERA HUDSON: It’s not just… for personal behaviors that this plays out. It also plays out in the workplace.

OLIVIA KANG: Here’s one study showing how this can work. Psychologists Monin and Miller at Princeton gave hundreds of people a stereotypically male job description – so this is something in the building industry that involved contracts, negotiations, and working with foremen and contractors – and then they asked these people would this job be better suited for men or women?

SA-KIERA HUDSON: Now, if you’re like me, I would immediately go, “ooh, this is a tricky situation.” … And I think many of us might go… “Like, no, you know, they’re equally likely to be in this position” because we don’t want to appear sexist.

OLIVIA KANG: So that was the test: how would people respond? And here’s how the scientists tested the power of moral credentials: before presenting this job description, they showed half the people other statements – things like “Men are more emotionally suited for politics than are most women”, “The best job for most women is something like cook, nurse, or teacher”, or “Most women are not really smart” – and then asked them: Is this statement right or wrong? Pretty simple question.

SA-KIERA HUDSON: Now what the research showed is that when I’m able to say something is really sexist, I now have a moral credential. I might say “well… now it’s okay for me to say that the man is more appropriate because clearly I’m not sexist because look at this good deed that I just did.” Just like that twenty minutes on the treadmill is not going to overcome that pint of ice cream, disavowing a simple sexist statement is not going to overcome the fact that we’re now being a little more sexist by saying the job is more suitable for a man.

OLIVIA KANG: It’s not just gender: we give ourselves credentials for everything from the philanthropic companies we work for or the candidates we endorse for political office. In another hiring study, Benoit Monin and colleagues found that people who endorsed Barack Obama (this was back in 2009) were more likely to endorse hiring white over black candidates later on.

Look – this is not intentional. We aren’t trying to find ways to give ourselves a free pass, or do things we know we shouldn’t do and don’t even believe in. But after doing something good – we seem to morally relax. So the question is how can we find better ways of balancing our moral budgets? How do we outsmart our minds?

OLIVIA KANG (TO SA-KIERA HUDSON): As a listener, I hear all of this and I’m like I just better not do any good thing ever again in my life. So what’s your response to something like that?

SA-KIERA HUDSON: Well, that’s not the takeaway message. That’s just anarchy and chaos. [What we should instead do is really pay attention to what we’re using our gold stars for. So, if your job is to help people – so you might be a doctor or a social worker, it’s really easy for us to come up with situations that we can put into our “do good” bank that we can then spend after our 9-5 job on something that might not be so good.

OLIVIA KANG: So that’s the first thing: just be aware of whether your day-to-day activities set you up to collect these gold stars for good behavior. Another thing to watch out for is language.

SA-KIERA HUDSON: Anything that sort of uses our past behaviors to justify our current ones… “We just hired a woman, we just hired an ethnic minority… well, I personally just drafted a diversity statement… the pool of applicants was just so diverse… therefore the outcome must have been fair.”

And the last thing we talked about was how to sever that link between past and present behavior. We can’t give ourselves amnesia for the good things we’ve done, but a simple thing to do is just decide what your gold stars get you ahead of time. Give yourself a cheat day on your diet, or schedule a massage or time off after a hard work week. If you have these rewards built-in, it’s less likely you’ll spend them somewhere else.

Ultimately, we want to make the best decisions for ourselves as well as for the companies we work with and society at large. Knowing that our choices are made with no strings attached to the past gets us one step closer.

Outsmarting Human Minds is a program founded by Mahzarin Banaji devoted to improving decision-making using insights from psychological science. Support for Outsmarting Human Minds was provided by a grant from PwC to Harvard University. This episode was developed by Olivia Kang and Mahzarin Banaji, and featured Sa-Kiera Hudson. Sound editing and mixing was done by Evan Younger. Music was composed by Miracles of Modern Science. For all studies cited in this podcast, visit outsmartinghumanminds.org.

Moral Credentialing was created and developed by Mahzarin Banaji and Olivia Kang with funding from PwC and Harvard University.