Expectations help us quickly navigate our world. Yet they can also blind us to the simple solutions, talent, and opportunities that are right in front of us. 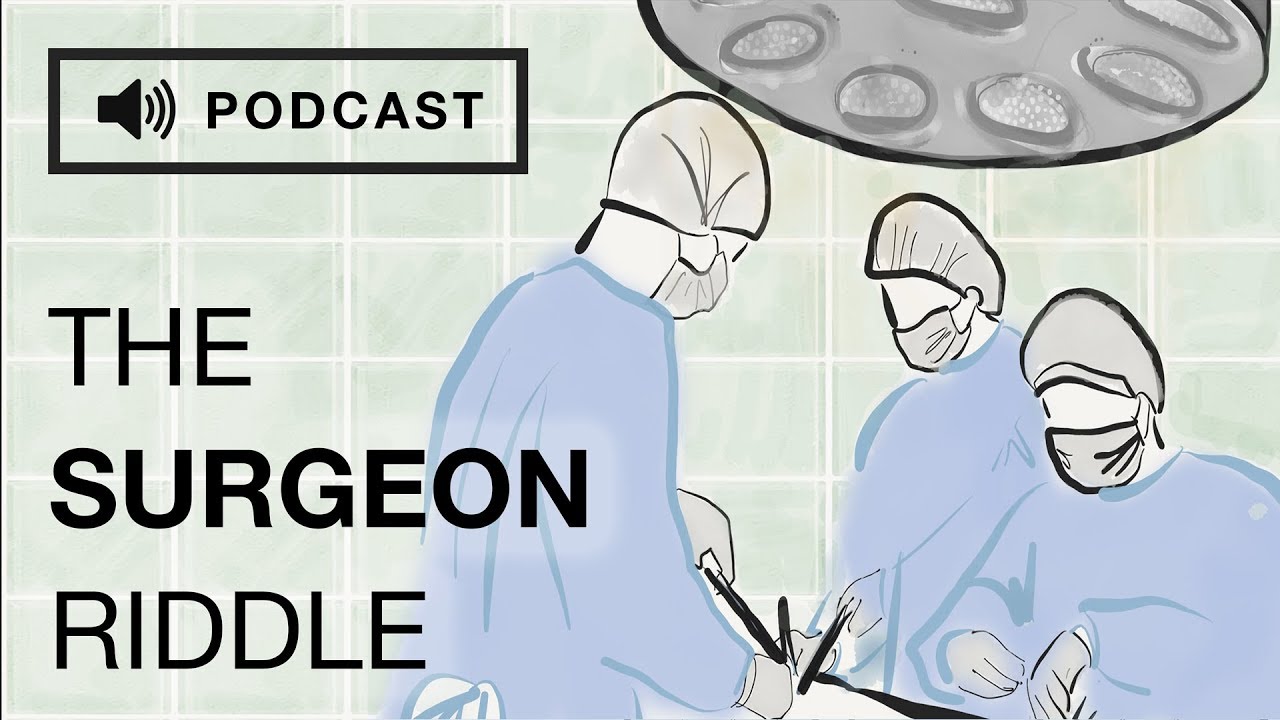 NARRATOR: Welcome to Outsmarting Human Minds, the podcast on understanding the mind to make better decisions in life and at work.

MAHZARIN BANAJI: When I want to teach people in the starkest way possible about the limits of their own minds, I often give them a well-known father-and-his-son-in-a-car-accident riddle.

MAHZARIN BANAJI: The riddle goes something like this. A father and his son are in a car accident. The father dies at the scene. The boy, badly injured, is rushed to the hospital. The attending surgeon looks at the boy and says “I can’t operate on this boy; he’s my son. How can this be?

This question was posed to me in 1985, and I thought long and hard about it, and I said, “well, the father who died in the car could have been the boy’s adoptive father, and the surgeon could have been the same boy’s biological father. That’s certainly logically possible.”

NARRATOR: And it’s just one of many answers we can come up with. The radio station WBUR recently posed this riddle, and I just want to play some of the responses that they got:

INTERVIEW SUBJECT 1: “Perhaps he meant grandson and he just left out the “grand” really quickly – no, no, that’s not, that’s not right, um…”

INTERVIEW SUBJECT 2: “The father who died at the accident was the stepfather”

INTERVIEW SUBJECT 5: “Or the dad didn’t really die…? And was revived somehow and rushed to the hospital and…”

INTERVIEW SUBJECT 6: “One of the fathers was a sperm donor?”

NARRATOR: So some of these are reasonable, others are more of a stretch – but like most riddles, the answer – when revealed – is simple.

MAHZARIN BANAJI: The surgeon is the boy’s mother. Now, duh! Why didn’t I get the answer right in 1985?

NARRATOR: In retrospect, the answer is a no brainer. But a survey conducted just a few years ago asked children and college undergraduates the same riddle, and they found two things: first, only 15% of respondents got the riddle right. And second: life experience didn’t influence their answers at all.

MAHZARIN BANAJI: Recently I was lecturing about these topics to a large group of people and I saw that when I asked the audience, “What’s the right answer here?” and a bunch of people said “The surgeon is the boy’s mother” I noticed that a woman sitting at one of the tables up front near me just hit her head on the table – [smack] – hard enough that I think I heard a sound.

So later when she came up to talk to me about this– with a blue bruise on her head I said to her “You shouldn’t have hit your head so hard on the table, when you heard the answer.” And she said to me: “of course I should have — my mother is a surgeon!”

Think about this. A person whose mother is a surgeon couldn’t get the right answer here. How can this be?

So it’s not just the “how can this be” of the riddle [laughter]. It’s “how can it be that we can’t get to the right answer”?

NARRATOR: Stories like this show us just how much our stereotypes influence how we interpret the world around us. And today’s podcast is particularly appropriate because recently, we saw the surgeon riddle come to life and make national news.

In October 2016, The Washington Post reported a story about Tamika Cross, a woman who was mid-flight when she heard another airline passenger calling for help. The passenger’s husband was unresponsive and needed medical attention, and luckily for them, Tamika Cross was a fourth year medical resident sitting just two rows away. She immediately raised her hand to offer help.

But in a social media post she made after the flight landed, Dr. Cross – who is young, Black, and female – described being told by the flight attendant:

“Oh no sweetie, put your hand down, we’re looking for actual physicians or nurses or some type of medical personnel, we don’t have time to talk to you.” Now she offered her help several times, but the flight attendant demurred until another doctor – an older white man – offered to help.

So why did this happen? Did Cross’s age, race, or gender influence the flight attendant’s judgment? We can’t say for sure. But research shows us that we do judge books by their covers: So for instance, a study done at Yale asked over 100 STEM professors across the country to evaluate one of two student resumes for a lab manager position. Now, these resumes were identical, but the names at the top were different: one was John, and one was Jennifer. And when the candidate had a male-sounding name like John, he was perceived as being more competent, people were more excited to mentor him, and he was offered $4K more a year than if the name at the top was Jennifer.

We can all be targets of bias. And we all can be its perpetrators. Mahzarin herself has been both on the giving and the receiving end of these kinds of biases. When Mahzarin was a young professor at Yale, students often mistook her for her own assistant:

MAHZARIN BANAJI: What intrigued me is that they didn’t have any doubt as to whether I was or was not Professor Banaji. They didn’t say “are you possibly Professor Banaji?” They so expected it to be somebody not like me that they would simply ask about when he was going to be back.

NARRATOR: Yet experiencing this bias firsthand didn’t stop Mahzarin from committing the same:

MAHZARIN BANAJI: I was in a surgical ward once, getting ready for surgery, when I saw a young nurse, and I asked her to point me to the anesthesiologist with whom I needed to talk prior to the surgery. I remember her expressionless face as she said: “I am the anesthesiologist.” Her look told me that this had happened to her many times before. And of course I was annoyed that I didn’t pause to allow for that possibility. But she looked so young! She was a woman!

I often joke that such mistakes are not always highly consequential – but hey: it really isn’t a good idea to have an angry anesthesiologist working on keeping you alive.

NARRATOR: We laugh about these kinds of mistakes, but sometimes– as in the case of the ill passenger on Tamika Cross’ flight – the potential consequences can be serious.

So how do we respond to situations like this and prevent them from happening again?

Let’s take a look at the airline’s own response. They didn’t ignore the problem; they changed their policy. Medical professionals are now no longer required to show credentials before assisting passengers in need.

MAHZARIN BANAJI: Because after all, what’s the chance that someone would impersonate an MD during an in-flight emergency?

NARRATOR: In this example, the airline’s response is worth focusing on: they recognize that all the training in the world won’t keep busy flight attendants from relying on stereotypes. That in addition to education, the best solutions lie in improving the practices and policies that shape our actions. That’s how we can outsmart human minds most effectively. That’s the takeaway.

MAHZARIN BANAJI: The world of the workplace has grown so much; the skills we are seeking come in such a diversity of forms. We’ve got to be able to recognize talent no matter how it presents itself. A youthful judge? A male nurse? A female construction worker? To all of these, we’ve got to say: why NOT? We can’t afford to lose out on talent just because it comes in a package we didn’t expect.

NARRATOR: Outsmarting Human Minds is a program founded by Mahzarin Banaji devoted to improving decision-making using insights from psychological science. Support for Outsmarting Human Minds was provided by a grant from PwC to Harvard University. This episode was developed with Olivia Kang and Evan Younger. Permission for excerpts from Radio Boston was provided by WBUR.

We fall for the surgeon riddle because stereotypes influence how we interpret the world around us.

One way to outsmart our stereotypes is to first recognize their source (e.g., that we have tend to associate surgeons with some groups and not others).

Consider all candidates who clear the objective benchmarks for a position, even if some of them are from groups you wouldn’t expect in the role.

The surgeon riddle reminds us that stereotypes can dumbfound us...at our own peril.

We don’t just think surgeon = male. For the category of “career” in general, we’re more likely to associate “male” with “career” and “female” with “family”. See what associations your own mind holds by taking the Gender-Career Implicit Association Test.

“Dr. Stanford, who practices obesity medicine at Massachusetts General Hospital and is a Harvard Medical School instructor, has carried the wallet-sized version of her medical license with her since 2016, when she read about a black doctor who was asked to show credentials when she offered to help a sick passenger […]” From Christine Hauser’s article in The New York Times: “‘Are you Actually an M.D.?’: A Black Doctor is Questioned as She Intervenes on a Delta Flight”

Research from Boston University shows that we still fall prey to the surgeon riddle: only 14% of BU students got the answer right. Full story by BU Today’s Rich Barlow.

“Soon there were #Ilooklikeanengineer tweets from women all over the world (and a few men) (and other creatures), tired of surprised looks when they meet a client for the first time, or arrive at an interview”. From Susan Svrluga’s “#ilooklikeanengineer wants to challenge your ideas about who can work in tech” (The Washington Post).

“A photograph is shaped more by the person behind the camera than by what’s in front of it”. Watch this video by Canon Australia to see just how powerful our expectations can be.

“I work for a plumbing company. You probably wouldn’t guess by looking at me, but I talk about toilets all day long”. Put the face to this quote here.

Operating on Autopilot was created and developed by Mahzarin Banaji, Olivia Kang, and Evan Younger with funding from PwC and Harvard University.