The science suggests that we evaluate men’s and women’s work differently… regardless of our own gender. Why? And what can we do about it?

Listen to this article

Imagine hearing this: “Alex is biased against women.”

Most of us would assume that Alex is a man. But the science tells us we should think again – that our hypothetical “Alex” is just as likely to be Alexandra as Alexander.

How can this be? 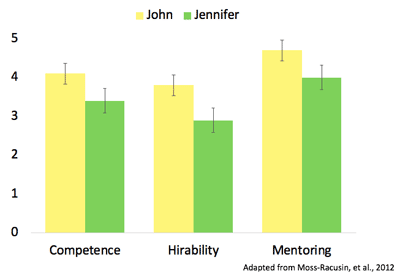 Corinne Moss-Racusin and her colleagues at Yale asked over 100 biology, chemistry, and physics professors nationwide to evaluate a candidate for a laboratory manager position. Everyone received the same application materials, but half of them believed they were evaluating “John”; the other half of the faculty believed they were evaluating “Jennifer”. Here’s what they found:

1. Despite having an identical resume, “John” emerged as the more desirable candidate. He was seen as more competent, deserving of more mentoring, and worth 14% more in starting salary.

2. Female faculty showed this male-favoring bias to the same extent as male faculty.

The science suggests that we see a difference between men’s and women’s work… even when no such difference exists. Even in Sweden, the world’s leader in gender equality, women applying for postdoctoral fellowships had to be twice as productive as men to be seen as equally competent. This pattern emerges again and again, regardless of whether we look at recommendation letters for medical school faculty applications, competence ratings for hypothetical employees, or literary managers’ and directors’ evaluations of plays. And recent data suggest that women show this male-favoring bias too.

This isn’t because women aren’t liked. In fact, work by Alice Eagly and collaborators shows just the opposite: women are actually viewed more positively than men. We see them as warm, nurturing, communal, and kind. After all, think “woman”, and “mother” is among the first concepts that spontaneously spring to mind. Even in the Moss-Racusin study described above, “Jennifer” was better liked than “John”.

The bias we see in the data is not about likability. It’s about competence. The fact is, we seem to divide the world into groups that are “warm” (trustworthy, kind, caretaker), and groups that are “competent” (strong, brilliant, leader). Decades of work by psychologist Susan Fiske has shown that entrenched in our thinking is the belief that groups cannot be both. The warmer we think a social group is, the less competent we believe them to be, and vice versa. This means that while our beliefs about men and women have changed and are changing all the time, we still carry the idea that these two groups differ in their most essential traits: mother versus provider; virtuous versus virtuoso.

These implicit stereotypes exist in our minds regardless of our own gender or social group, simply because we have seen countless depictions over the course of our lives of what a “scientist”, “nurse”, “CEO”, or “secretary” looks like. These automatic associations likely underlie why 83% of children asked to draw a scientist draw a man, and why even women in science discount “Jennifer” as a laboratory manager.

Learn more about how we develop implicit associations, and how these can shape our perceptions of others.

The question that looms large in the face of this data is this: if implicit stereotypes about competence and gender shift how we evaluate men’s and women’s work – what can we do about it?

It’s tempting to point our fingers at the Johns of the world, but don’t assume that gender bias is itself gendered. We can all be carriers of the stereotype that women are warm but men are brilliant – regardless of what we consciously believe.

Next, be proactive. We may not be aware of our bias, so find ways to take it out of the equation. Try removing gendered information from resumes. Be transparent about what benchmarks you are using to evaluate success, and hold yourself accountable by using physical checklists, or encouraging others to keep you in check.

Finally, challenge your intuitions. If you find yourself thinking “Her application just isn’t as strong as his”, ask yourself a simple question: “Based on what?”. Compare candidates side by side, apply the same benchmarks, and see if your beliefs still hold.

This article was written by Olivia Kang, Kirsten Morehouse, and Mahzarin Banaji.